Ride a bicycle and give it some thought...

Reposted from the Sonoma County Gazette 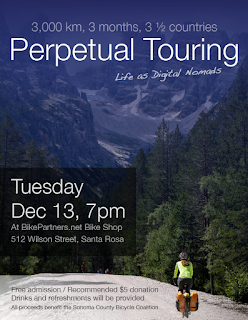 
Bicycle Thought
By Geoffrey Smith
Over the years (61 -- now 64 -- so far) I’ve sought cognitive relief in creative ways. When my head is full of confusion and doubt. When I’m troubled about things going on in my life, big or small, I have turned to a variety of distractions in an effort to restore balance. I’ve found that physical exercise provides the best remedy for what ails me: walking, running, kayaking, hiking, backcountry skiing.
But nothing restores my optimism and zest for life like bicycling!
One of my earliest memories as a young child was that of ‘borrowing’ my 5-year old friend’s bicycle while he was having lunch, and taking it for an inaugural ride down the sidewalk. Oh joy! In an instant, my world opened up in ways previously unimaginable. Suddenly my mobility options expanded dramatically. I was optimistic about the future!
Many years and countless miles later, bicycling remains my go to solution for exercise – not only of body, but of mind.  There is something about floating seemingly effortlessly across the surface of the planet, in defiance of gravity, that resonates. Perhaps it’s an inner-ear thing. The constant flow of oxygenated blood and endorphins to the brain over a sustained period of time leads to an enhanced state of mind and clarity of thought that often surprises me. It’s a coming together of mind, body and heart. Free of the shackles of a desk, or four walls, or television news – out there on a bicycle I enter a new sphere of consciousness that I refer to as ‘bicycle thought’ – that form of thought which can only be achieved while pedaling a finely-tuned bicycle.
In the difficult times that lie ahead, I will be turning to my two-wheeled therapy more regularly. I will point my bicycle in new directions, take paths less traveled by (with a nod to Robert Frost), and relish in the constantly changing scenery. Because it is with these changes that I become more optimistic with hope for the future.
If despair is an allegorical mountain that looms before me in the course of my daily life, then optimism is that feeling I get when I pedal up that mountain – slowly, steadily, enthusiastically – with my head full of enriching thought, and the knowledge that soon I will reach the top, then coast down the other side.
Geoffrey Smith is a life-long bicycle touring enthusiast. He owns and operates BikePartners.net Bike Shop in Santa Rosa.
PHOTO: Silke Fleischer touring near Cortina, Italy, by Eric Converse